Positive Vibes on a Sick Sunday.

I’m officially sick. I thought it was minor allergies due to the change in season and the ridiculous amount of pollen in the air. However, the current levels of congestion I’m experiencing today and the fact that it seems to be something spreading around the family now,  lead me to believe my initial assumption was incorrect. I typically have never done ‘sick’ like the average person, I like to stay busy and am not much for resting, blowing my nose, or taking tons of meds. I usually just make sure I start taking my iron supplements and daily vitamins again, drink a gallon of organic apple juice, and make some chicken noodle soup. This typically means I’m sick for 2 weeks instead of one like the average person, but I don’t enjoy calling out of work, or posting up in bed in a Nyquil & Lifetime Movie Marathon induced coma, but being sick with an infant is different. I never realized how much I actually do, how much energy I exert just playing/dancing/changing&feeding. So, this time when I realized I was sick, I also realized that I can’t really afford to not have 100% of myself for 2 whole weeks, so I did things a little differently, and here’s what I’ve learned.

1. A full day of rest is really good for you.

I never thought just lounging on the couch would ever do you any good, but my body ached all over, so I really had no choice. Yesterday I reluctantly called out of work, and also had my mother take Cash off my hands for the day. I didn’t know what to do with myself, I felt awful, but felt even worse not being productive or having my baby to cuddle with. I cleaned up the apartment at first, did some laundry, and then finally felt like I earned a seat on the couch. After waking up from a little nap I took while watching a particularly awkward episode of 4 Weddings I felt renewed, I immediately got up and made myself lunch and then started feeling awful again, but nonetheless, if just a tiny nap during a 30 min show can help, I can only imagine how much better I’ll feel after an entire day of rest. I’ll update you tomorrow, but I’m fairly certain I’ll be almost back to normal!

2. Over the counter medicine isn’t all that bad

It’s not like I was ever told it was bad, I never really read any articles about it either, I’m just not big on putting chemicals in my body anymore. Alcohol occasionally, and I do have a serious Diet Coke addiction, but other than that I basically just like to eat fruits, veggies, natural dairy, and farm fresh meats. I make pretty much everything from scratch when it comes to sweets, snacks, and carbs. That all being said, I’ve just never really cared to take medicine unless it was extremely important (like an antibiotic) or I was extremely ill. Usually in those cases a doctor would prescribe the medicine anyway, so I felt a little more at ease knowing medically it was necessary. Well, last night I took an over the counter sinus and cold medicine and I woke up feeling clearer. Now, I won’t say I woke up feeling better, I could breathe through my nose again, but now I have a terrible cough and congestion, but I think that if I take it again tonight the congestion will clear and I’ll be all better tomorrow. (again this is all hope)

I can’t even tell you how much better I felt after taking a hot shower while bathing with a lavender body wash and eating a Ricola sore throat drop. I got out feeling so clear headed, and temporarily even decongested. The Lavender +steam  opened up my sinus’, while the Ricola cooled my throat. If you aren’t feeling well, but have to get out of the house, I definitely suggest adding this to your “getting ready” routine. 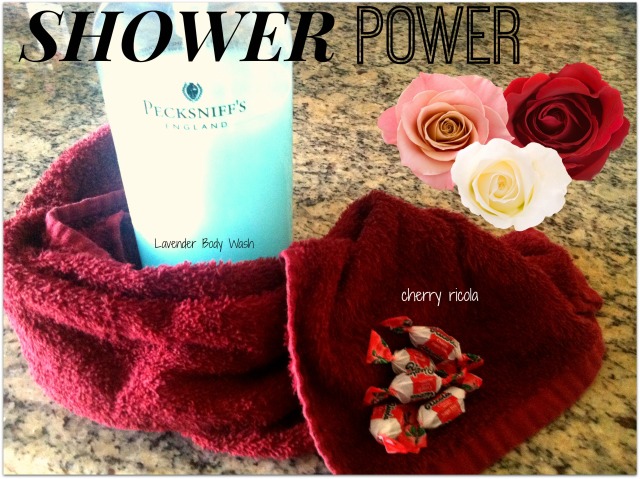 4. There’s a comfort in Cotton

I’m not big on sweat pants. I bash them constantly, and have little respect for people who wear them out of the house in a public area. I do however, love fabric pants. I only own one pair, I got from H&M on a whim that are leopard print, and I usually only wear them around the house because the fabric is very loud, but since I’m just lounging around the house today, I wanted to put together an outfit I could find comfort in and still look adorable in. It’s all comfortable, it’s all cotton, and it even looks decent enough to photograph or wear to the grocery store if need be!

When you’re sick, you can also pull off pigtails. There’s a silver lining to everything.

5. Treat yourself to something you rarely have time for

It’s a great way to make yourself feel instantly better. You know, something small that you seldom allow to seem important enough to do on a regular basis. For me, I personally would take a bubble bath if the hot water in my building would allow for it, instead I gave myself a mani/pedi. I never go get my nails done, because I hate fake nails, and I can’t commit to a finger-nail polish color long enough to pay to get them painted. I decided I wanted to go with a pastel and a pop. I chose this awesome Lavenderish-greyish base color, and “Sassy Sorbet” as my pop. It’s really fun with Easter coming up! Plus it instantly boosted my self-esteem which usually runs pretty low when I’m sick since I always look a mess.

There you have it, some ways to help yourself feel much better when you’re sick. I know obviously going to the doctor is on the check list. I’m making an appointment when the office opens up tomorrow. This is just my sunday remedy. Hope it helps!

Chicken Noodle Soup, and a soda on the side,